Got a question about this product?

The Alpha & Beta Industrial Series of axial roof units are designed for a wide range of free intake and ducted exhaust systems. These durable and robust units feature adjustable pitch impellers which allows for optimum airflow and power efficiency. There are 6 sizes in each range extending from 500 to 1000mm diameter.

The Beta Industrial RSSL Series of smoke-spill fans has been fully tested to meet the air performance and high temperature test requirements of Standards AS/NZS1668.1:1998 and AS4429:1999.

An additional requirement of AS/NZS1668.1:1998 with respect to un-sprinklered buildings (300°C for 30mins) requires dampers to fail-open during smoke spill operation.

The fail-open discharge damper latches come in two forms; the first being a manual release type requiring manual closing after the fan has been run. The second design, an electro-mechanical type permits the shutter latch to release and close automatically after the fan stops. For advice on smoke-spill wiring requirements refer to AS/NZS1668.1:1998.

Quick select envelope curves are shown on pages D-8/9. Accurate selections, including comprehensive Noise Data, can be obtained from your local Elta Fans office or by using the Intelligent Ventilation Product Selection Program. Refer to Elta Fans for performances at speeds other than shown. When shutters are fitted ensure the roof unit is mounted with the shutter spindle pointing down the roof. When shutters are fitted to the Alpha series derate the performance by 15-20%. Where prevailing winds are high we recommend the fitting of Magloks®. For capacities greater than shown for the Alpha & Beta Industrial series, contact your local Elta Fans office.

For applications prone to high prevailing winds refer to PDF.

Pressed galvanised steel base; cowls and windbands are of plastic, fibreglass or galvanised steel. Shutters can be fitted as an optional extra on the Alpha series. Metal components have a corrosion resistant finish.

Impeller blades are GRP as standard with an option of aluminium, nylon or anti-static materials where required.

The fans are built with a squirrel cage induction motor with sealed for life ball bearings. The motors to suit a wide range of voltages and frequencies can be supplied. Motors with 2-speed windings or to meet Ex d, Ex e, Ex nA or Ex tD standards can be supplied.

Thermistors can be provided on all motors except where standards prohibit their use. 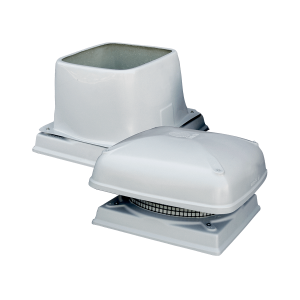 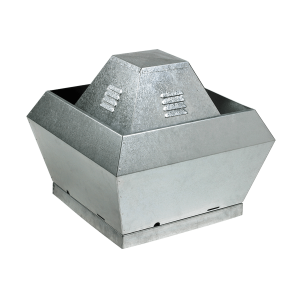 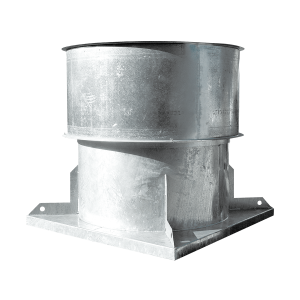 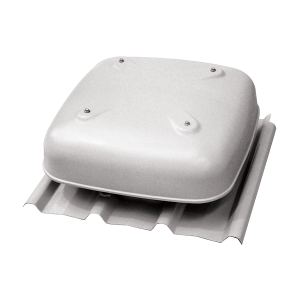